Assamese People and Their Culture 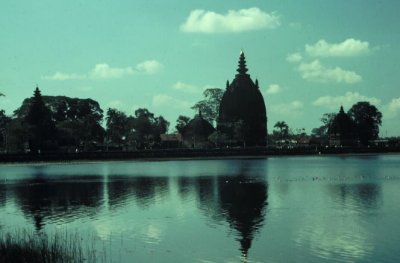 The population of Assam is a broad racial intermixture of Mongolian, Indo-Burmese, Indo-Iranian and Aryan origin. The hilly tracks of Assam are mostly inhabited by the tribes of Mongolian origin. This broad racial intermixture is the native of the state of Assam, called their language and the people ``Asomiya'' or ``Assamese'' which is also the state language of Assam.

Accoring to the 1991 census, the population of Assam is 22 million, 89 percent of which is rural. Assamese-speaking Hindus represent two-thirds of the state's population and indigenous Tibeto-Burman tribal groups make up another 16 percent of the total (estimate). More than 40 percent of Assam's population is thought to be of migrant origin. The term "Assamese" is often used to refer to those who are citizens of Assam. Native Assamese, Mymenshingy settlers (from Bangladesh) and tea-garden laborers are thus included in its coverage. The term can also be used to describe the indigenous or long-settled inhabitants of this northeastern state. The language of the native people of Assam is called Assamese.

The state has the largest number of tribes within their variety in tradition, culture, dresses, and exotic way of life. Most tribes have their own languages; some of their traditions are so unique and lively that these causes wonder to others. Boro (or Kachari), Karbi, Kosh-Rajbanshi, Miri, Mishimi and Rabha are also among these tribes exhibiting variety in tradition, culture, dresses, and exotic way of life. Assamese is the principal language of the state and is regarded as the lingua franca of the whole northeast India. The Assamese language is the easternmost member of the Indo-European family. Although scholars trace the history of Assamese literature to the beginning of the second millenium AD, yet an unbroken record of literary history is traceable only from the 14th century.

During the six hundred years of ruling, the Ahom dynasty managed to keep the kingdom, independent from Mughal, the muslin invaders of India before the British, as well as other invaders though Mughal attacked Assam seventeen times. During this era, the Assamese society was exogenous. The British entered Assam in 1824 as tea planter which was the starting point of the destruction of Ahom dynasty.

A majority of the Assamese is the Vaishnavas (a sect of Hinduism). The Vaishnavas do not believe in idol worshiping and perform Namkirtana where the glory of Lord Vishnu is recited. The other religions such as Budhism, Christianity, Hinduism, Islam etc. are also practiced in Assam. The national festival of Assam is the Bihu which is celebrated in three parts during a year with great pomp and grandeur by all Assamese, irrespective of caste, creed or religion. Bengali-speaking Hindus and Muslims represent the largest minorities, followed by Nepalis and populations from neighboring regions of India. About a quarter of the population is Muslim. Most Muslims are recent settlers from Bangladesh, although there have been some Muslims in Assam for several centuries. The older Muslims are well-integrated with the society.

Artist and sculptors, masons and architects, and others practicing minor crafts such as weavers, spinners, potters, goldsmiths, artisanns of ivory, wood, bamboo, cane and hide flourished in Assam from ancient times. Weaving is the traditional craft of the Assamese, and the women of almost every household take pride in their possession of a handloom. They use their handloom to produce silk and (or) cotton clothes of exquisite designs. The Eri, Muga and Pat are the important silk products of Assam. The scientific name given to the worms which produce the muga silk is Antehra Assam---due to the fact that these worms cannot survive in any other climates other than the climate of the Northeast. Gandhiji complimented the Assamese weavers as artists who could weave dreams in their loomes. Cultural Life The cultural life of Assam is interwoven with the acitivies of two important cultural and religious institutions: the satras (the seat of a religious head, the satradhikar) and the naamghar
(the house of names or the prayer hall). The satras hve been in existence for more than 400 years.

Most of the native population of Assam is Vaishnavite Hindu. Villagers generally associate on the basis of membership of a local center of devotional worship called "nam ghar" or "the house of names" (of God), whose members describe them as "one people" or "raij". Villages are usually made up of families from a number of distinct castes. The caste system, although it exists, is not as prominent as in other parts of India.

Among the Assamese, a form of Hinduism exists with two contrasting emphases, that of caste and sect. In caste, one finds polytheism, hierarchy, membership by birth (inherited status), collective ideas of humanity (caste groups), mediation of ritual specialists, rites conducted in Sanskrit through priests, complexity and extravagance of ritual, multiplicity of image, and salvation through knowledge or works. In sects, one finds monotheism, egalitarianism among believers, membership by invitation (acquired status), individual ideas of humanity (individual initiates), direct access to spiritual revelation, worship conducted in the verncular by the congegration, simplicity of worship, incarnation of God in the written word, and salvation through faith and mystical union.

The most important social and cultural celebrations are the three Bihu festivals observed with great enthusiasm irrespective of caste, creed and religious affinity. The Bohag Bihu, celebrated in mid-April, is the most important one. It is also known as Rangaali Bihu ("rang" means merry-making and fun). It is observed by dancing and singing in open spaces as well as in the houses. The second important Bihu, Magh Bihu, is a harvest festival celebrated in mid-January. It is celebrated with community feasts and bonfires. It is also known as the Bhogaali Bihu ("bhog" means enjoyment and feasting). The third Bihu festival is observed in mid-October. It is also known as the Kangaali Bihu ("kangaali" means poor) because by this time of the year which is before the harvest is brought home, the stock of foodgrains is low in a common man's house.

The Assamese also observe pan-Indian religious festivals such as Durga Puja, Dol-jatra or Fakuwa, Janmastami, and the Eids.

Another important aspect of the cultural life of the peopel of Assam, particularly the women, is weaving of fine silk and cotton cloths of various floral and other decorative designs.

Photo of Xiba Doul in Sibsagar (Xibaxagor) was taken by Chandan Mahanta of St. Louis